As you may have heard, one of the U.S. Supreme Court’s last acts this term was the axing of Section 4 of the 1965 Voting Rights Act that required pre-clearance by the Justice Department (or a federal court) of voting changes by certain states and local governments

with a history of racial discrimination.  As Chief Justice John Roberts wrote, Section 4’s formula for determining which jurisdictions must seek pre-clearance, “is based on decades-old data and eradicated practices.” By eradicated practices, he means the literacy tests and poll taxes that suppressed voter registration and turnout in the 1960s and early 1970s.  Apparently, he and his Court majority gazed out upon the country (which presumably included the former Confederate states), and determined that the Act appeared to have worked its magic – despite a Congressional bipartisan majority’s reauthorization of the Act and the approval by a presidential son of the South (G.W. Bush) in 2006.

Seven years later, the Court exhorts Congress to go back and seek evidence on whether this system of “racial entitlement,” as Justice Scalia calls the Voting Rights Act, is still needed.  Makes me wonder.  Could they be thinking that racism has been eradicated because President Obama was elected?  If that’s your reasoning, Justice Roberts, please enlighten me:  how much of the Southern white vote did Barack Obama win in 2012?   As one conservative blogger said, “In what is being described as a resounding victory for conservatism, the overwhelming majority of native White Southerners voted against Barack Obama for the second time.”

Which brings me to Paula Deen, her brother, Bubba Hiers, and bad timing.  If only the Court could have heard about Ms. Deen’s admission of her use of the “n” word and her

proposal that her brother have a plantation-themed wedding with black servers dressed up like plantation slaves.  And it might have been instructive to learn that at Bubba’s seafood restaurant, he restricted black employees to the back of the building, “out of sight of the white customers.”  May I suggest – if Congress follows the Court’s dictate to study racism in the South to see what jursidictions should be included in the pre-clearance coverage – that Ms. Deen and Bubba be called as witnesses?

If only Congress didn’t have to go through this exercise.  If the revelations concerning Deen and Hiers had happened a few months sooner, members of the Court might have gleaned  that a racist mindset persists in the Jim Crow south, particularly among a certain generation.  It was telling that Paula Deen was confused at first — mystified that anyone would have a problem with her use of the “n” word, particularly since they weren’t recent utterances or only used in jokes.  Frankly, as a born and bred daughter of the South, I don’t remember a time in my life when I could have FORCED the “n” word out of my mouth, unless it were during an intellectual discussion about the word, which I don’t think I’ve had yet.  Even here, my fingers refuse to type it.

But, some may wonder, are voting rights of blacks and minorities in the south at risk because of racial discrimination or simply because they happen to be partisans, generally, for a particular party?  Don’t the winners of elections get the spoils – including the right to

gerrymander and insulate themselves from all political opposition?  Normally, that would be true, but Congress long ago realized that white majorities in the South can’t be trusted to distinguish between political opposition in a way that doesn’t rely on race.  And no matter where you live in the country, arbitrarily depriving voters of convenient and historical places and hours to vote is undemocratic and not worthy of a country built on democratic ideals.

The bottom line is that I’m not sorry to see Paula Deen ostracized from the national stage because of her statements and fantasies about plantation days and the south of Jim Crow.  But there’s another reason not to feel bad for Paula Deen.  For too long, she has gotten away with running a food empire that is akin to pushing drugs on the local street corner – she just gets to do it on a larger scale and legally.

Yes, the local drug pusher doesn’t have a national platform like Paula’s from which she pushes her drugs of choice:  fried lasagne, chocolate-covered butter, and anything else

dripping in salty, greasy, sugar-laden southern-ness.   To some, her national celebrity and financial success functions as permission to satisfy their addictions to that bliss point of fat, sugar, and salt.  After all, who would have said that Paula Deen peddled anything more than the good Southern fare that our mamas put on the table and we grew up eating? It’s tradition and what could be wrong with tradition?  Taking advantage of that emotional attachment, Paula Deen weaved a cocoon of blissful ignorance that anything with her imprimatur could be lethal to human health, contribute to the obesity epidemic, or play a role in this nation’s rising health care costs.

And yet, because we live in a free society, we couldn’t muzzle her.  We couldn’t even suggest that her cooking might be bad without risking a barrage of ravings from Sarah Palin about our freedom to eat whatever we wanted . . . I can hear Sarah now, alleging a conspiracy helmed by Michelle Obama who, we all know, had the galling audacity to promote healthy eating for children!  And Ann Coulter – before her love affair with Chris Christie ended (he’s dead to her now) – would have become Paula Deens’s new BFF because how dare anyone say that contributing to obesity is bad?  After all, according to the emaciated Ann (6 feet tall, 145 lbs), only girthful Chris can save the Republican party, so thou shalt not speak ill of obesity!!

Considering the alternatives, circumstances were kind to us this time.  Paula Deen exits stage left as a racist, which is so much easier for our media and talking heads to deal with 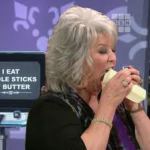 than “food pornographer.”  Hopefully, she’ll take her butter and sugar-dipped fried cream cakes and crawl away.  I only wish the timing had been better – maybe about midway through the Supreme Court’s term, before they’d finalized their thoughts about voting rights.   Her sacrifice could have served this country in a way her foodie celebrity never did.

Observer of life who writes about Austin, women's issues, history, and politics. I worked in the Texas Legislature for 9 years, moved to the State Comptroller's Office where I worked for 9 years, then went to work as an Assistant Attorney General after graduating from UT Law, for more than 20 years. Since retirement in May, 2013, I've identified myself as a writer, a caretaker, widow, grandmother, pandemic survivor, and finder of true love.
View all posts by nowandthenadays →
This entry was posted in Politics and tagged 1965 Voting Rights Act, Bubba Hiers, Jim Crow, Paula Deen, U.S. Supreme Court. Bookmark the permalink.