Beer in the Backyard with George W

Posted on September 9, 2015 by nowandthenadays

Lumbering along the long and winding campaign trail to find a Republican candidate to run against Hillary (or Joe, Martin, or Bernie), it’s hard to ignore the reality show that is Donald Trump. He dominates most news and public affairs broadcasts with an act that surely makes Rush Limbaugh sob into his pillow at night, “He’s stealing my shtick!”

Like Limbaugh, the Donald comes without a set of filters, saying whatever comes to mind – most of it rude, coarse, and offensive.  In many respects, he follows the Republican game that started out as “We’ll-make-Obama-a-one-term-president,” and has morphed into “We’ll-destroy-Obama’s-legacy.”  But he also plays a multi-purpose offense that includes Obama and anyone else who steps on his cape or appears to be a serious threat to his nomination/election. 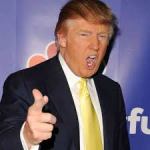 One must wonder about this chord in the key of Ugly that has captivated the ear of so many Americans. I understand the tea party folks — they’ve always reveled in rude, bombastic public discourse as an alternative to simply shooting up the saloon. But there are more than tea partiers at Trump’s soiree. Are these people mesmerized by his “government is broke and I’m the only one who is smart enough to fix it” message? Or are they among the morbidly curious enjoying another car wreck?

Whatever the case, if Trump doesn’t become the next president, any network would be crazy not to give him his own television show. No, not another season of “The Apprentice,” rather one where he stands at a podium and bloviates for a while, kind of Don Rickles unleashed.  They’d call it “The Bloviator.”

He could have guest bloviators.  I suggest his first guest could be the most embarrassing Texan to go to Washington since George W. Bush – Ted Cruz, who is another mystery of this campaign season.  Why does he have any following at all? I mentally cringe every time he opens his mouth. Did my fellow Texans – my extended neighborhood – really elect this guy?  He’s so “unappealing,” to borrow an adjective for Cruz written by Professor Gary Keith (Texas government guru).

In fact, Cruz has a pathological streak of ugliness that renders him worse than Trump. For instance, in the days after Beau Biden’s death from brain cancer, Ted Cruz was trolling for laughs with comments about Joe Biden being a joke, a laugh line. He couldn’t even wait until the man buried his son!  Similarly, the day after former President Jimmy Carter announced the discovery of his cancer, Ted Cruz inserted snide remarks about the former president into his campaign speech, claiming that Obama’s administration is the worst since Carter’s. These two incidents alone speak volumes about Cruz’s true character. Volumes entitled No Decency, No Compassion, and No Empathy.

Leaving aside the question of who is worse, Trump and Cruz both subscribe to the theory that it pays to be a jerk. Actually, this theory has been tossed around by the business community in recent years, particularly in the wake of the Steve Jobs biography. As Jerry Useem notes in his June Atlantic article “Why it Pays to Be a Jerk,” the Jobs biography has caused many people in leadership to ask, “Don’t you think I should be more of an asshole?”

In pursuit of an answer to that question, Useem reviews the research and evidence that is lacking in most self-help “success literature,” starting with the theoretical framework set out in Aaron James’s book, Assholes: A Theory.  It just so happens that James’ definition of an asshole coincides almost perfectly with the definition of narcissism in academic psychology, according to Donald Hambrick, a management professor at Penn State.

The further I read in Useem’s article, the more I realized that Donald Trump fit the definition perfectly.  If I’m right, what Trump allows us to see is not what voters should fear most.  As stated by the Mayo Clinic, the outward manifestations of this personality disorder – an inflated sense of their own importance, a deep need for admiration and a lack of empathy for others – are just parts of a mask. Underneath all this ultra-confidence lies a fragile self-esteem that’s vulnerable to the slightest criticism.

In this regard, consider how Trump has responded in tone or substance to every slight (real or perceived) from the media world or his fellow candidates. They shoot a little bullet and he goes nuclear with his mouth or media ads, surely a measure of fragile self-esteem that needs bolstering by big talk and action. Does anyone really want him, the equivalent of an insecure little boy, having the codes to real nuclear weaponry?  It’s hard to fathom.

Back in 2000, when George W. Bush was a leading candidate for president, I admit to being similarly perplexed about his success with voters. I asked my friend, and renowned political strategist, Tony Proffitt, to explain it for me. He said that it boiled down to the fact that people could imagine sitting around in the backyard and having a beer with George. He could be their next-door neighbor, someone relatable.

At first, I struggled with that idea, but admittedly, nothing else explained it. Bush’s government experience was negligible compared to that of Al Gore’s.  Also, he had a very sketchy record in terms of military service, school records, alcohol, drug use, a whole array of negatives that would disqualify the typical candidate. And let’s not forget his garbling of the English language and common metaphors!

So, do we apply the same reasoning to explain the Donald Trump phenomenon – a relatable, beer-drinking, next door neighbor? A guy who travels in private jets and helicopters? The Howard Hughes of politicians, a germophobe who uses sterilizing wipes after handshaking? Does anyone really think he’s going to quaff a Bud with them?

Maybe people are relating to his anger, recognizing a kindred spirit.  Are they fellow narcissists who believe they know all the answers and could clean up Washington in a week if only given the opportunity? Compromise and working with the other branches of government? No way, they say! Anyone who thinks differently is STUPID!!  Really?

But I’ve often heard that “angry” doesn’t translate into electoral victory.  Just imagine  four years of Trump constantly railing about the bureaucratic pace of government? What about a rotating staff and cabinet as the headline “You’re fired!” dominates the front pages of all the newspapers?  Will he engage in temper tantrums because he can’t fire Congress or members of the Supreme Court? Will anyone who dares to criticize him or ask questions he deems verboten be suddenly faced with an IRS audit or if they happen to be part of the White House press corps, physically removed from press briefings?  Do people really want to buy tickets to these performances for four years?

Overall, it’s been an interesting summer on the campaign trail, but I don’t like what it says about some of my fellow Americans, in particular, and the political system, in general. Trump and Cruz are only two of the scary prospects.   I’m also worried about the retired neurosurgeon, Ben Carson, along with many others in the field for a variety of issues, including their inexperience, contempt for women’s rights, misunderstanding of the Supreme Court’s role in our government, goal of dismantling the Affordable Health Care Act, and desire to incorporate religion and government.  In short, Republicans keep falling to new lows and as they follow the new Pied Piper, Donald Trump, we can only expect to go lower.

Frankly, it’s all so disgusting, I almost want to turn off the news and go have a beer with George W!  Almost.

Observer of life who writes about Austin, women's issues, history, and politics. I worked in the Texas Legislature for 9 years, moved to the State Comptroller's Office where I worked for 9 years, then went to work as an Assistant Attorney General after graduating from UT Law, for more than 20 years. Since retirement in May, 2013, I've identified myself as a writer, a caretaker, widow, grandmother, pandemic survivor, and finder of true love.
View all posts by nowandthenadays →
This entry was posted in Politics and tagged assholes, Atlantic magazine, Donald Trump, George W. Bush, jerks, Jerry Useem, Jimmy Carter, Joe Biden, narcissists, presidential campaign, Rush Limbaugh, Ted Cruz. Bookmark the permalink.

10 Responses to Beer in the Backyard with George W