Why Spinach Reminds Me of Hitler

Maybe it’s the barrage of disturbing news – presidential politics, terrorist violence, coups, or Americans shooting other Americans – or maybe it’s the melting Texas heat. Whatever the case, I’m going to give my whirling mind a rest and hand over my metaphorical pen to Grumpy Old Woman (GOW) so she can stew a bit about her latest pet peeve.

[Enter GOW] It’s about time! So, what I want to know is what’s the friggin’ deal with all the spinach? How did that vegetable which once minded its own business quietly in cans become the darling of the restaurant world? Used to be, I’d only see spinach, which looked like oozing seaweed or fish tank goo, on school lunch trays and I never saw anyone actually eating it! Now, it’s everywhere I turn and “it’s making me sick,” as Roseanne Roseannadanna would say. 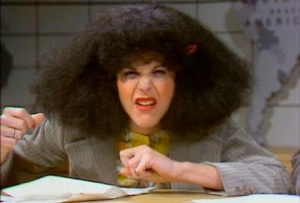 I think this turn of events began in the 90s when restaurants began offering spinach salads. Up till then, we were an iceberg culture for the most part and these salads would have never been eaten if they weren’t served with some high fat and high sugar dressings to hide the bitterness of the spinach. I tried the hot bacon dressing at Hyde Park Grill, for example, and suddenly, I could wolf down a spinach salad, no prob.  Drinking ramekins of dressing would have been unseemly, after all.

Unfortunately, our short relationship came to an abrupt end one day when I experienced a prolonged work stoppage that alerted me that my body was not going to tolerate any more spinach in its factory. Since I wasn’t eating that much, I thought it strange that the powers-that-be-me were so adamant on the subject. But a line in the sand had been drawn and even two or three leaves were sufficient to interrupt the assembly line.

At first, I figured it would be easy come, easy go. After all, what was there to miss?  I had actually despised the vegetable for most of my life. And in the final analysis, isn’t spinach just a bitter leaf that tastes like dirt?

But, in fact, there was no easy go. About the time of our disaffection, you see, Austin began turning into a Foodie/Vegetarian/Farm-to-Table town and these groups adooore spinach. The darn vegetable began popping up everywhere, often unannounced – spinach as a side dish, spinach as a bed for meats, spinach in smoothies, spinach swimming in soup, spinach mixing it up with lettuce leaves in dinner salads – in essence, everywhere! Some restaurants with French and Italian-inspired menus are kind enough to give notice of the vegetable in a particular dish by designating it “Florentine” (spinach was introduced to France from Florence, Italy) but you can’t depend on that heads-up. Many restaurant cooks, with the crazy mindset that no one cares, just throw it on plates willy nilly, with nary a whispered mention on the menu. Surprise, surprise!

Unsurprisingly, spinach leaves show up most commonly in salads, especially those purportedly made with “field greens.” The field green salad (as per Wikipedia) generally consists of “a mixture of very young leaves and shoots of wild and cultivated plants, including endive, dandelion, arugula, lamb’s lettuce, oak leaf, mache, radicchio, chervil, sorrel, frissee, purslane.” Notice that spinach is not listed. Yet, most of the time, a “field green salad” that reaches my table will include spinach. So, when the wait staff can’t guarantee the greens are free of spinach (since no one else has ever asked them what’s in the salad), I simply ask them to make my salad with romaine lettuce only. Easy enough, you’d think.

But, I have found that once there is spinach in a kitchen, pure romaine can be hard to get. Spinach is an aggressive vegetable – refusing any peaceful co-existence. For instance, I ordered a Cobb Salad recently at the Central Market Café that demonstrates my point. Customarily, a Cobb Salad is made with romaine lettuce and CM’s menu even says “romaine lettuce” in what I consider plain English. Upon receipt of my salad, however, I saw spinach leaves gloating up at me along the surface – no telling how many of the devils were hiding inside! I returned to the counter to explain that I didn’t want spinach in my Cobb. The gal at the counter said they couldn’t make a Cobb without spinach because – get this -– the containers of romaine and spinach are very close together in the kitchen and the leaves invariably get intermingled.

“Would you like me to get you something else, maybe a hamburger?” she asked. For a few seconds, I must have stopped breathing I was so flabbergasted. She wasn’t even going to try to prepare a salad that conformed to their menu!? And since when is a hamburger a logical substitute for a salad? Who considers a beef patty and bread as even marginally equivalent to romaine, tomatoes, feta cheese, eggs, bacon, avocado, and kalamata olives? (Is our education system failing, or what?!!!)  Needless to say, before I was done, the restaurant manager persuaded his kitchen team to produce a Cobb salad sans spinach. But, what an ordeal!

You’d think it’s just the traditional “foodie” venues where spinach is pursuing its agenda of manifest destiny. But noooo.  Spinach infiltration is happening now at our neighborhood Cheddar’s, known for its simpler, less healthy fare. Last week, I ordered an item I had often ordered from the “lighter side” menu featuring fish, ginger rice, and a garden salad, always spinach-free in the past. This time, however, the garden salad had been transformed into a spinach salad so generously apportioned, I could barely find the fish under all the dark green spinach leaves!

As you can see, I’m losing the war against a vegetable that has overwhelmed all former resistance to it. Spinach containment is so yesterday! Kitchen workers have been brainwashed so thoroughly, they are incapable of imagining why any diner would object to the dump of some spinach leaves on their plate. It’s like Hitler marching across Europe – it will work its way into as many countries (menu items) as possible! Where is Eisenhower when I need him?

My only hope is that some ingenious researchers will determine that spinach causes baldness and, now that I think about, how about erectile dysfunction, too?! Imagine how quickly male diners would start rejecting even a molecule of the vegetable! Chefs would probably designate it a vegetable non grata and have to quit thinking of more ways to bombard us with it. No more lettuce due diligence for me!

So, if you hear of any research about the spinach-baldness-ED connection, please alert me. Better yet, why not start an internet rumor to that effect since folks will believe most anything they read on the internet? Just ask Donald Trump. And once he hears about it, he’ll probably want to build a wall around it or deport the vegetable back to Italy. He could be useful for that.

Now, having gotten this off my chest and enlisted your help with my cause, it’s time for my nap. But, it just goes to show you, it’s always something!  So, I’ll be back with another something. [Exit GOW] 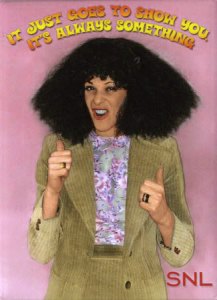 As she lays down, I hear her grumbling about the Nike uniforms at Wimbledon that were like baby doll pajamas and made the female players look like prepubescent girls or lingerie models. “It’s enough to make me sick,” she mutters. As I dim the lights, I start to tell her about a LPG golfer on the cover of “Golf” magazine, dressed in some kind of baby doll outfit. But, I keep quiet. I’ll tell her later . . . once I’m sure I’ve got my pen back.