The Thrill of Body Scans

Posted on January 8, 2011 by nowandthenadays

I’m no fan of the ever-increasing security gauntlet we must endure to board a plane these days, but I’d rather let some stranger leer at my body x-ray (if so inclined), than get blown up in mid-air.  Call me crazy, but I suspect these scanners will find my individual body picture pretty ho-hum, not much different from the other 10,000  middle-aged women they’ve seen.

As interested as I am in arriving at my destination with body parts intact, I still complain about having to be at the airport 2 hours before departure, taking off my shoes, and not being able to bring dangerous weapons, like nail files, on board. 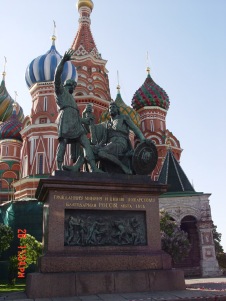 But consider that the word for travel comes from the old French word “travail” which means to work.  Travail is thought to have come from “tripullare,” which is the three-sectioned whip that Roman soldiers used to encourage productivity out of their workers.  Apparently, “tripullare” became “travail,” which became “travel” because the act of moving from one place to another was associated with hellish torture.

Indeed, some airport ordeals fit into the category of hellish torture, but for many of us modern travelers, the rest of the trip is pretty uneventful, assuming, of course, there isn’t a crying baby behind you or a neighbor who pushes into your space as if he were doing isometrics with your arm as the resistance.  The truth is, with so many travel resources at our fingertips, we are able to work out a smooth and adventure-free trip.  Listen to friends who have traveled lately, and the airport stories are often more compelling than the anecdotes about beautiful beaches, gondola trips, or the Eiffel Tower.

Even before the internet I would research a place through informative  guidebooks.  My personal favorite is Fodor’s, but sometimes I would pick up a Frommer’s, too, since they often contain different recommendations for hotels, restaurants, walking tours, and interesting tidbits.  I have also been known to consult books by Rick Steves, but I have to admit that I’m naturally suspicious of anyone who recommends a 10-day European vacation with only two changes of clothes, laundry detergent, and a clothes line. 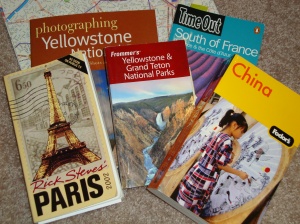 But the internet has taken planning for a trip to new heights.  We can look up  restaurants, pictures and videos of locales, check out the reviews, including Zagat’s without having to buy a book, make reservations, even having a print-out confirmation before we step foot in hell, I mean, the airport.  Not only can we order plane tickets and car rentals on Expedia or Orbitz, but we can also google and print out maps that guide every step from hotel to the famous building we plan to visit.  In some areas of the planet, we can even see a picture of the street and neighboring buildings, leaving absolutely nothing to surprise or surmise.
So – if you think about it – we can virtually visit almost any place we might want to physically visit . . . the only reason to buy a plane ticket is to smell, eat, drink and get sick in a strange place.  After all, it’s hard to get Montezuma’s revenge here in the US.

In Ken Follett’s sequel to Pillars of the Earth, called World Without End, it is said, “Pilgrims should not spend too much time planning their journey – for they might learn of so many hazards they would decide not to go.”  This was during the 1300s, of course.

Fast forward to 2011, and one could ask, have we planned all the hazards out of our journeys, so that it’s hardly worth going? Are there any adventures that merit the effort of stepping away from our comfortable lazy-boy lives?  Isn’t it the unexpected – the escape from the commonplace – that gives us the thrill that we seek by traveling to new places? 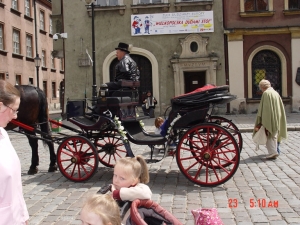 As we’ve made travel more and more uneventful in this high-tech age, I wonder if some folks might find it just as satisfying to avoid the airports and rent a travel movie or, for an Italian delight, watch the new Johnny Depp thriller, “The Tourist” to see Venice, which has surely never looked more beautiful.

On the other hand, if you still seek a little hazard and excitement, we still have the airport drama, the thrill of finding your bag is still underweight, the uncertainty of picking the fastest-moving security line, being wrong about your choice, the fear that your new diamond nail file will be confiscated, the rush to your gate, and the fight for the overhead bin space.

Maybe our the Transportation Safety Administration came along with body scanning in the nick of time.  Before travel got too boring or predictable, we have something new to experience: the “will they or won’t they” of having your body scanned, enduring humiliation, dehumanization, not to mention, radiation.  So let’s thank the TSA for one more travel adventure!

Maybe soon they’ll be giving us prints of our body scans – like baby ultrasound pictures – as souvenirs to put in our travel scrapbooks!

Observer of life who writes about Austin, women's issues, history, and politics. I worked in the Texas Legislature for 9 years, moved to the State Comptroller's Office where I worked for 9 years, then went to work as an Assistant Attorney General after graduating from UT Law, for more than 20 years. Since retirement in May, 2013, I've identified myself as a writer, a caretaker, widow, grandmother, pandemic survivor, and finder of true love.
View all posts by nowandthenadays →
This entry was posted in Uncategorized and tagged body scan, Fodor's, Frommer's, security, Travel, TSA. Bookmark the permalink.

2 Responses to The Thrill of Body Scans