Austin May be Weird, But Portland is Cool!

Posted on August 15, 2013 by nowandthenadays

I’m not generally known as a travel blogger (assuming I’m known for anything at all), but a recent trip to Portland was motivation for me to write about that city for its sheer audacity, if

nothing else.  Portland, you see, has unabashedly adopted Austin’s unofficial motto:  Keep Austin Weird.  Actually, they didn’t steal it word-for-word since they deleted Austin and substituted Portland.  But imagine the gall it must take, considering, after all, that Austinites are going to discover that their credo was purloined.  We get around.  So, as the Austinite on the scene, I looked around Portland and have done a quick weirdness comparison between the two cities so that you, dear readers, can decide which city’s weirdness claim has more merit.

First of all, as a matter of logic, in order to keep something weird, seems like there must be a legacy of weirdness to maintain.  Austin wasn’t weird at all until the late 60s when the Armadillo World Headquarters stepped in to save us from mediocrity: turning cowboys and college kids into wannabe hippies, who subsequently morphed into slackers, i.e., 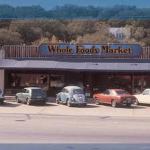 former hippies, college kids, “tree huggers,” and others who adopted the laid-back lifestyle of the formerly far-out.  These were the years of low rent and cost of living, i.e., before Whole Foods became Whole Paycheck.  Apparently, Keep Austin Weird these days means holding on to our hippie and slacker past – despite the fact that reasonable property values, low rents and cheap food are distant memories.  Surely, this mass delusion deserves big points on the weirdness scale.

But that’s not the only reason Austin is perpetually weird.  Sometime in the 70s, after the completion of most of Mopac (Loop 1), Austin decided it wasn’t going to grow anymore so it didn’t need any

more thoroughfares.  “If we don’t build them, they won’t come” was the city philosophy.  Weren’t two north-south ones enough?  Why think about building an east-west thoroughfare or two?  Mass transit?  We were fine with buses, even though they held up traffic and traveled around virtually empty for years.  In recent times, some bicycle lanes have been haphazardly created so that a cyclist isn’t risking his/her life 100% of the time, and amazingly, we now have a train line although I’ve never actually seen it.  But I hear that it begins somewhere in far northwest Austin and whisks you past downtown to a stop east of I-35 where you can catch a bus to go back west to downtown.  For a so-called progressive city, Austin has barely transited itself out of the 70s.  Weird enough?

And not only do we fail to address the transit needs of our citizens, but nowadays we invite huge numbers of visitors to participate in our ways (or lack thereof) of getting around town.  Year after year, musicians, music-lovers, and internet geeks descend upon downtown as our guests at South by Southwest or SxSW and try to move between venues.  Forget the fact that this convention causes a maggot wrestle of traffic that bedevils downtown workers for those two weeks.  Then, there’s the Austin City Limits Music Festival, ACL, another yearly event (which now spans two weekends because one shameful weekend wasn’t enough) in which we invite another huge group of folks to despoil our one true city treasure, Zilker Park, and close down what passes as an east-west thoroughfare in Austin, Barton Springs Blvd.  And don’t get me started on the Circuit of the Americas east of town that hosts another annual event attracting crowds of Eurotrash (just repeating what I’ve read, not judging).  The best that can be said is that it’s activities take place east of town.

So without even mentioning the lock-down of Austin’s downtown every other Sunday morning for 10ks, 5ks and 3k foot races, Eeyore’s Birthday Party, and Austin’s self-referential Keep Austin Weird Fest, let’s consider Portland.  They have a weirdness heritage that may have

preceded Austin’s with the founding of Mills’ Ends Park in 1948, also known as Leprechaun Park, qualifying for the world’s smallest park in the Guinness Book of Records.  Measuring 452 square inches, the park is located on a median strip of S.W. Naito Parkway in downtown Portland, and began as a little circle dug for the installation of a light pole.  When the pole failed to materialize and weeds sprouted in the opening, Dick Fagan, a columnist for the Oregon Journal, planted flowers in the circle and named it after his column in the paper, Mills’ Ends (a reference to leftover irregular pieces of wood at lumber mills).  As described in Fagan’s column, the existence of the park came about when he looked out the window and spotted a leprechaun digging in the hole. He ran down and grabbed the leprechaun, which meant that he had earned a wish.  Fagan said he wished for a park of his own, but not having specified the size of the wished-for park, the leprechaun gave him the hole.  Over the next two decades, Fagan often featured the park and its head leprechaun, Patrick O’Toole, in his whimsical column.

Fagan died in 1969, but the park lives on, cared for by others and the site of the yearly St. Patrick’s Day festivities and other events like rose plantings by the Junior Rose Festival Court.  It was named an official city park in 1976, even meriting re-location to a nearby planter during 2006 road construction.  On March 16, 2007, it was returned to its home with a ceremony attended by the Royal Rosarians, bagpipers, and the Fagan family, including Fagan’s widow, Katherine.  Undoubtedly, this park and the city’s history of leprechaun sightings gives Portland high marks for weirdness.

Next, what would Portland be without its  Voodoo Donuts, aptly named by its use of the English word with the most Os?  The locale is heralded by a Pepto-Bismol pink sign with a

brown, voodoo doll-shaped donut, but even before you spot the sign, a long line, winding around the building will alert you to its location.  Voodoo is known for its varied and unusual (e.g., bacon) toppings and the inventive shapes of its donuts.  A couple of local bartenders founded the shop in this bar-riddled neighborhood, envisioning it as an after-hours place to sober up.  Local lore is that Voodoo once made donuts with a topping of actual Pepto-Bismol.  Use of medicinal toppings was

stopped, however, by a health department that frowned upon medication in donuts, especially Nyquil (that might have been a joke our guide made up).   So, while Voodoo has a flavor of weirdness, the weirder part for me is that tourists stand in such long lines to get a good blood sugar spike.  So, does Portland get the points for weirdness or the tourists?  You decide.

Could Powell’s City of Books – founded in the early 70s – propel Portland into the weirdness winner’s circle?  Maybe, considering that this is a bookstore where you’d be advised to

grab a store map at the information desk when you arrive.  You will need it in order to navigate three floors of book shelves occupying a whole city block, and upon leaving, like me, you will probably merit one of its free stickers, “I got lost in Powell’s City of Books,”  map or no map.  And if Mills’ End can be a park, Powell’s can surely be a city.  The true genius of this store, in my opinion, aside from

ts size and the number of information desks, is that it shelves new and used books together – truly a two-for-one experience in book browsing/buying.  Believe me, worse things could happen than getting lost in Powell’s.  But does it contribute to Portland’s weirdness?  For something so rational and wonderful, it seems that points are deserved for “way cool” more than “weird.”

Since I railed at (pun intended) the Austin transit situation (not worthy of designation as a system), I’ll speak to Portland’s transportation system which consists of Max, the light

rail, buses, trams, etc.  It should also be noted that almost a quarter of their workforce bikes to work!  And what about the luxury of taking the light rail from downtown Portland all the way to the airport door (a 40-minute ride) for $2.50?  The reverse is also true – you can see the waiting train from the baggage claim area!  While it’s weird that Austin has nothing like this, I’m not sure that Portland can claim any weirdness points.  But again, very cool, Portland!

In the final analysis, dear readers, wouldn’t it make more sense for Portland to give up on the stolen weirdness motto and adopt the more accurate Keep Portland Cool?  After all, isn’t that coolness (literal) factor what draws us northwest during Austin summers?  Everything else Portland can offer is gravy, or should I say, herb vinaigrette?

Observer of life who writes about Austin, women's issues, history, and politics. I worked in the Texas Legislature for 9 years, moved to the State Comptroller's Office where I worked for 9 years, then went to work as an Assistant Attorney General after graduating from UT Law, for more than 20 years. Since retirement in May, 2013, I've identified myself as a writer, a caretaker, widow, grandmother, pandemic survivor, and finder of true love.
View all posts by nowandthenadays →
This entry was posted in Old/New Austin, Travel and tagged ACL, Armadillo World Headquarters, Austin, Austin City Limits, Circuit of the Americas, Dick Fagan, Keep Austin Weird, leprechauns, light rail, Mills' Ends Park, Patrick O'Toole, Portland, Powell's City of Books, SxSW, Voodoo Donuts, Whole Foods, Zilker Park. Bookmark the permalink.

3 Responses to Austin May be Weird, But Portland is Cool!